All too soon, my week of exploring the SF Bay Area is coming to an end! Today I drove out to Big Basin State Park and went for another cool hike. I had hoped to have time to do the 11 mile loop suggested on many sites, but I did not so I opted for a loop of about 5 miles consisting of the Sequoia Trail with a return on the Skyline to Sea trail.

The approach drive was incredible:

This is certainly one state park that does not seem to have to worry about attendance counts. People everywhere near the roads, and a nice big visitor center, store, etc. The first part of the hike was a bit too close to the activity for my taste, as it hugged the road and travelled by many of the rustic tent camping sites (above average sites for a park, not too near cars and certainly no RV’s – I would camp here!).

The Sequoia Trail leads you to a trail spur across the road to Sempervirens Falls, which was flowing, if only slightly. I set up and tried to take some pics with my old camera, but did not get anything I liked for my efforts – oh well. I hung out there for about 15 minutes before moving on.

While the Sequoia Trail had some elevation gain before that point, the vast majority of its gain was on the next short segment – the very much exposed Slippery Rock – a tall hill made entirely of rock (perhaps even just one rock). I am sure it lives up to its name in the rain. Sadly, I was too busy working to make it up the hill to think that maybe I should get picture of it – I’ll leave this to your Google skills.

The trail the crosses a road (where a sign points the way to the Skyline to Sea Trail) and continues on through a beautiful forest setting until it reaches a fire escape road. In this stretch I met a woman hiking with her young daughter who was trying to figure out if she was lost. She said that we were on the Skyline to Sea Trail already and had expected to come across the Maddock cabin site by that time. I’ll admit that she had me doubting if perhaps I missed that I had started down that trail – a trail that would have led in two directions. If I had, perhaps I was going the wrong way. But, I was certain I did not see any options for going another direction so I kept going and soon found the fire escape road and Sequoia’s intersection with both directions of the Skyline to Sea Trail. 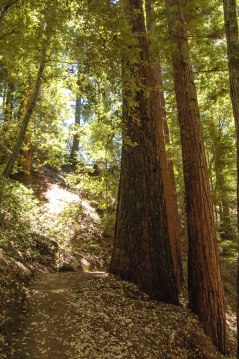 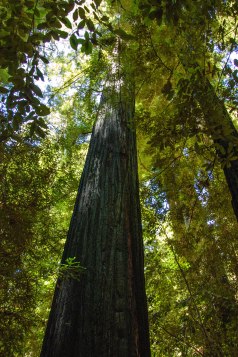 This trail led through gently sloping ups and downs past the Maddock cabin site and on toward the trailhead at park headquarters. Once I got past the falls this was a great hike past many amazing tall trees. I also do not think I have mentioned yet that it is fairly warm out here yet there is pretty much no humidity (including in the streams). That makes for no bugs in the woods! I wish I would have had time for the longer Berry Falls hikes, as I think those falls would have been flowing a lot more. Next time! Perhaps if we come back we’ll camp here before moving on to some very quiet camping at Portola. Overall, Big Basin would be a great park to base a family hiking vacation out of. Hard to not like big trees!