While the rest of America was getting ready to watch the big game, I said my goodbyes to the big trees of coastal California, and headed northeast to Crater Lake – a truly super bowl.  It was an amazing visit, though the drive reminded me of how much more work needs to be done to bring our forests back to life.

After awaking around 8AM, my foot was clearly telling me it was time to leave the redwoods.  I am sure it would have loosened up, but it was a great excuse to leave and see Crater Lake in the winter. I quickly packed up camp, said my goodbyes to the big trees at Jedediah, and pointed my car northeast.   I had all day to work with, and so I casually retraced my arrival route until I reached Grants Pass, Oregon, where I began my journey on the southern half of the Rogue-Umpqua Scenic Byway.

I had barely begun that leg of the journey, when a sign for Ti’lomikh Falls caught my attention.  I made the right turn into the park and took a quick stroll to check things out.  Finding a pretty cool rapid (not sure what constitutes a “fall”), I went back and grabbed my camera, just as two whitewater kayakers were finishing a scout of the rapids.  There I remained, taking shots from various angles, and with various exposure times to produce what I hoped would be nice photos of the rapids.  When I was done, I also took some shots with my phone, as phones these days are really quite amazing cameras.  I concluded with a video – to capture the sound of the water crashing over rock.  Just as I began my video, the first kayaker entered the scene.  He made a successful run of the rapid, and I turned upstream just in time to capture the second kayaker.  He, too, had a great run, at least until he slowed to eddy out and got caught up by a strainer on river right.  Once he freed himself from that, he slid sideways into a hole and flipped.  Nearly instantly, he rolled back up and was on his way downstream.  It has been about 15 years since my last whitewater run, and though I was never very good or experienced, the quick rivers of the mountains make me wish I were at least running some of the easier rivers.  I captured a few shots of their second run (not as many as I had planned as my camera takes pictures quicker than it can save them).  I left my name and e-mail on their truck in case they wanted copies, and continued my journey.

Here is the story of the falls:

My drive continued through some gorgeous farm country with Mount McLoughlin in the backdrop.  My wife and I are lightly considering a move and Oregon is on the list of possibilities (though Asheville, NC may top the list at the moment).  We have about 40 goats and enjoy our life near a college town, but still with a rural feel.  This area was just plain rural, but at least I was getting a feel for what the land is like apart from the mountains.  Based on what I saw so far, I think it may be green enough to own goats and not go broke paying for hay.

A quick comment on the weather.  At this point, the temp was in the high 50’s and I had no reservations about making the drive to Crater Lake – even though signs requiring drivers to have chains (which I did not) began appearing with greater frequency.  After a stop at the Phil’s Frosty in Shady Cove, the drive straightened out and began a slow but steady ascent.  The temp kept dropping and snow appeared, and began to grow higher along the roadside.  I began to have concern about the drive, but with temps still in the low 40’s I pressed on.  The snow continued to increase in depth, but the temps leveled off, and the drive was completed without anything else noticeable happening.

Wow!  The Crater Lake Visitor Center had about 12 feet of snow all around it, yet was still open.  It was a pretty neat scene that I have maybe only witnessed once in southern Michigan, back in the late 70’s when I was 5 or less – and so don’t really remember. 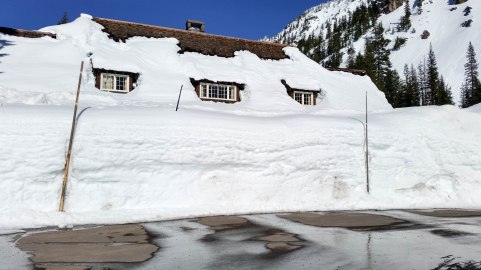 My obligatory passport stamp obtained, I continued on to Crater Lake.  Wow, wow, and triple wow!  The gift shop was without power and closed (guess they wanted to see the game!), and so I could not rent snowshoes.  The snow depth was about 10 feet, and luckily fairly firm.  While hiking was not easy, I did manage to wander a little bit each direction from the parking lot.  The road around Crater Lake is closed in winter so this is the only side I would see.  Good enough I would say.  I feel very lucky to have come in winter, when I suspect the scene is at its best.  Enough word, let the pictures speak: 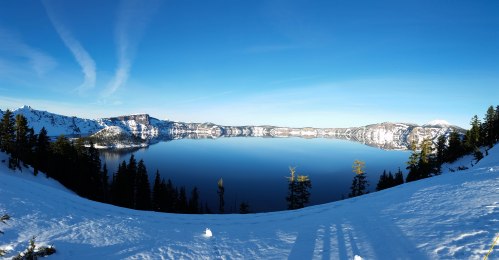 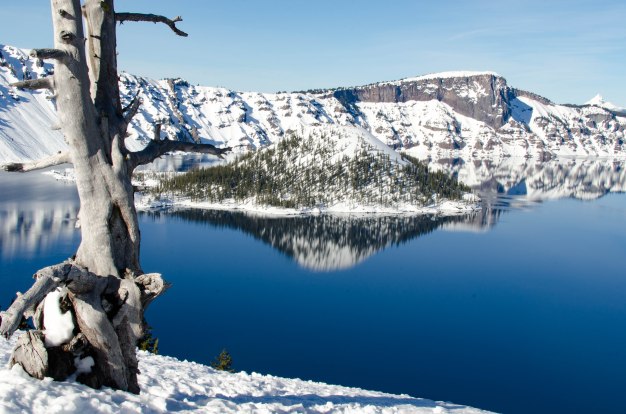 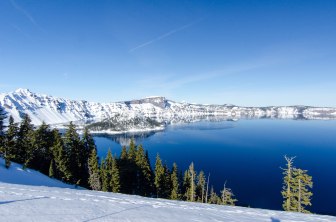 I spent a couple hours enjoying the scene, and left with time to still enjoy the views on my return trip down the scenic byway to Medford.  I did follow one more sign for a waterfall, and just as the last light of the day ebbed, I got to see the 173’ Mill Creek Falls and the 242’ Barr Creek Falls, which cascade within about 100 yards of each other.  Just upstream the river makes a sharp descent down a boulder field, but the light was quickly disappearing and with my headlamp back in the car, I hiked back out.  Another ten minutes and it would have been a challenge to find my way.

That was it for my trip, just the hotel and my flight home tomorrow.

Now, about that “scenic” drive through the “forest”.  Now, don’t get me wrong, the drive was scenic, with two great waterfall stops, and beautiful farm country.  However, I continue to dislike our system of forestry.  The forests through which I passed were not really forests, but rather large fields of crops.  Neatly organized rows of monoculture agriculture.  Not a healthy, vibrant forest, which would arguably be just as or more productive yet much more sustainable for generations to come, while also supporting a healthy ecosystem of plants and animals.  I know that the Forest Service is in the Department of Agriculture and thus has production as a top priority, and I am very happy to have so many millions of acres protected from other uses.  I also know that I and our world needs wood products (I lean green but am certainly a consumer like everyone else), yet it seems like we need to improve our model of forestry.  Just as we are learning that monoculture farming, while productive in the short-term, is not sustainable or healthy for the ecosystem (research almond farming and its effects on bees as an example), I hope we learn to apply those lessons to our forests as well.  Now, admittedly, I am more of a business guy, not a trained farmer, forester, or naturalist, and my choices of reading materials may only serve to reinforce my views, but I do hope to one day visit our national forests and have them be truly scenic – and alive.

Sorry about that, I’ll step down off my soapbox now.

This trip was an amazing experience – the magnificence of our Coastal Redwoods and the grandeur of Crater Lake.  I hope my good fortune of being able to visit such incredible places continues.