My primary forms of exercise are walking in from the back of the parking lot at work, and reading backpacking books and trail journals.  Sure, I get out hiking and kayaking a tad, but no where near as much as I would like.  Thus, that makes me an out of shape forty-something CFO living in a part of Michigan where a few small hills changes a trail rating from easy to moderate, and who had only once, for one night ten years prior, donned a backpack for an overnight trip.

So, of course taking on a stretch of the John Muir Trail with five days of planning was an excellent idea.  Towering mountains, beautiful lakes, solitude. First time in the backcountry.  My home and my pantry on my back.  With an extra fifteen pounds of camera gear.  It would not go as well as I had planned.  Yet, I would be left wanting more.

Having been granted a ten day hall pass from my amazing wife, capped off with a four day photography workshop in the Eastern Sierras, my original plan developed over nine months, consisted of plenty of hiking and camping, focusing on areas where I would hope to capture a few bonus wall/Instagram worthy photos.  Two days camping in the redwoods south of San Francisco, one at Tuolumne Meadows in Yosemite, and two somewhere near Mammoth Lakes, CA.  A pretty amazing trip with plenty to discover!

Then, less than a week before I was  to leave, images of Ediza Lake in the Ansel Adams Wilderness appeared in my browser as I browsed places to hike and photograph.  I was hooked.  And I had plenty of lightweight, high quality backpacking gear that had yet to be used.  My years of reading of others’ adventures on the great long trails of the nation surely had me at least moderately educated.  The idea to backpack for a few days was born.

A single permit for entry to the wilderness at Devil’s Postpile National Monument hiking north magically became available two days into my relentless searching on recreation.gov.  The plan was very beginner appropriate.  Three days, two nights.  Fifteen miles, a bit over twenty if I was feeling good and could make it to Ediza Lake.  A fairly heavily used part of the trail, limiting the risk of a solo hike in the backcountry.  Lots of lakes so no worries about finding water.

I did not know too much about that section of trail, other than the mileage would set me up for a couple short hiking days, ending with a longer day three.  I would hike in from the national monument to join the JMT, and head north to Trinity Lakes where I would stop to camp for the night.  Roughly five miles.  On day two, I would either hike two more miles to Rosalie Lake, or tack on roughly another five and push on to Ediza.  Day three would either be a 7-10 miles depending on how I felt and where I ended up the day before.

With this change of plans, and the unexpected need to work a day in the middle of my trip, my new itinerary would begin with a seven hour drive to Tuolumne Meadows, arriving just before sunset, followed by a night at Old Shady Rest campground in the heart of Mammoth Lakes, and an early start to my first day on the trail.  My day in Tuolumne and Mammoth Lakes gave me an opportunity to hike at altitude a tad, helping me transition from 900 to 7500 feet of elevation. This is Crystal Lake, just outside of Mammoth Lakes.

That evening I picked up a few last minute snacks to add to my pack, and figured out where to catch the shuttle into Devil’s Postpile.  Upon departing the bus, a quick stop at the ranger station for a passport stamp in the not so light journal I would have plenty of time and energy to write in while in the back country, and I was on my way.  Speaking of weight, my pack weight was pretty reasonable, probably about 35 pounds or so with plenty of food and water.  Plus 12 of camera gear.  A made the detour to see the monuments namesake postpiles, then turned back toward the trail that would enter the Ansel Adams Wilderness and join the JMT.

Did I mention the trail would go up, and up, and up some more the first day?  No?  I did not pick up on that as I studied the trail mileage in advance.  That easy first day to the Trinity Lakes would include about 1,600 feet of net elevation gain, plus the elevation lost and gained along the way.   It was grueling, but the scent of the forest and the  excitement of being out in the wilderness kept me powering on.  I made it to a Trinity Lake in early afternoon,and thought about eating and filling up my water, but my trait of not being able to just sit still and be took over and I kept on hiking, thinking there would be another Trinity Lake at which to filter water.

Turned out that was the last of the Trinity Lakes that I saw and I would have another two miles hiking up and up until reaching Gladys Lake.  My water ran out after half a mile, so the upward hike was a bit of a killer.  The trail at last leveled out then dipped down to Gladys.  The trip down, thirsty, seemed to take forever, even though it was just less than an hour.  I reached the lake as the sun was beginning to set, and simply set up camp, tucked my bear canister in the woods about 100 yards away, filtered a jug of water and passed out in my tent.  My appetite still eluded me, though I forced down a Milky Way and half a Clif Bar, the first things I had eaten all day.

Remember that 12 pounds of camera gear?  It had been barely used, with the heaviest of the items, my tripod, never having been unstrapped from my pack.  No amazing lake pictures, and worst of all – no star shots, star trails, or time lapse.  Just a few basic lake shots.  That heavy journal?  Nope. 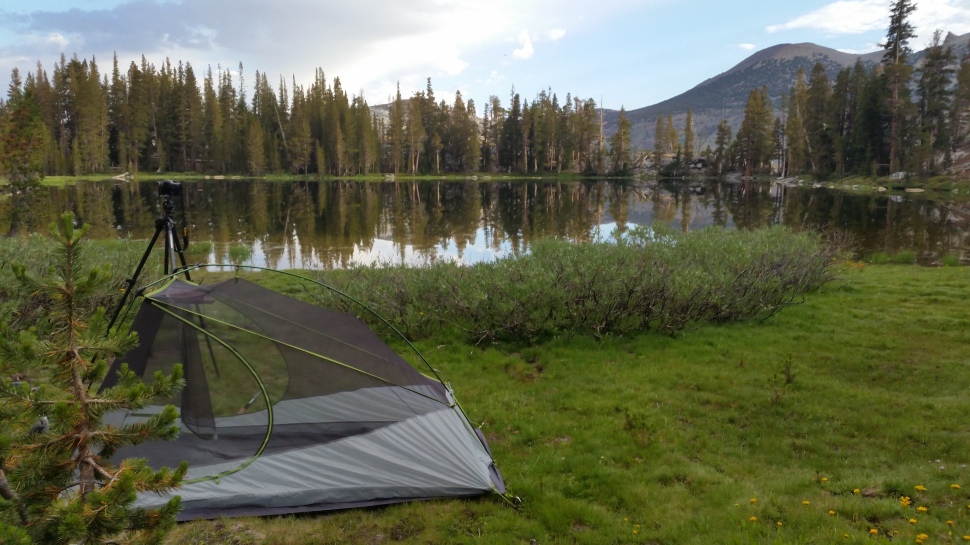 Morning came too late, I had slept thru sunrise.  Still no appetite.  Now 24 hours since a real meal – not really sure where the lack of appetite came from.  Still, happy to be out in the mountains.  After breaking down camp and downing a bunch of water, the hike down to Rosalie Lake was quick and easy.  So quick and easy, I was bummed I had not pressed on just a bit further, as the mountain backdrop to the beautiful lake was inspiring.

I lingered at Rosalie Lake for a couple hours and seriously considered staying put for the rest of the day and night.  The lake was beautiful, and there was much to explore along the  creek that fed the lake.  That would have been the perfect choice as it turns out, but that is not the choice I made.  With the sun starting to move high in the sky, I decided to book it to Shadow Lake in case there was some perfect photo I would otherwise miss.

The hike from Rosalie to Shadow is not all that long, and consists mainly of what seems like a never ending series of switchbacks, as it drops quickly about 700′ in elevation.  Not too bad, though the accumulation of not eating in over 24 hours and probably a bit of dehydration made it less fun than it might have been had I spent a recovery day at Rosalie.  Shadow Lake was indeed beautiful, and the amount of people on trail picked up due to Shadow Lake being a popular day hiking destination. 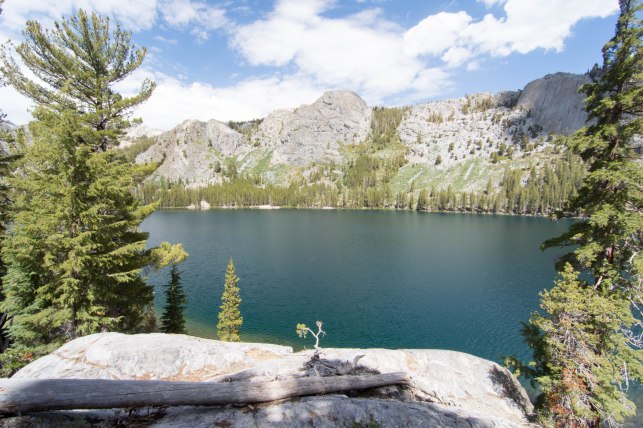 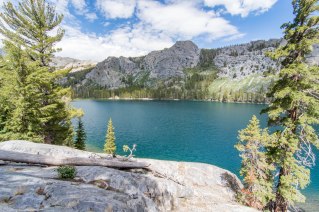 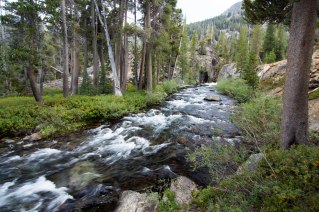 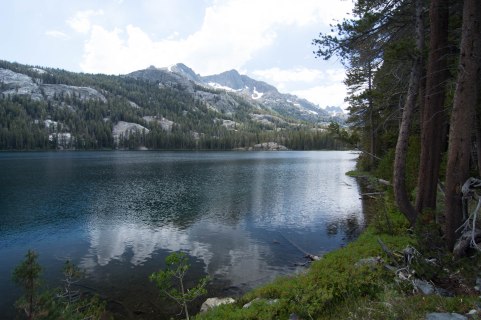 Heights and I are not the best of friends, and this hike had kept me in my comfort zone so far.  The bridge over Shadow Creek would be a bit of a surprise.  Thank goodness it was wide, though one might think adding a hand rail would be an OK idea.

Sadly, being the brightest part of the day, the water was too bright to try finding too many great shots, and one  time over the bridge was enough.  At this point,I was feeling pretty wiped out, and while I had  hoped I could make it the five or so extra miles to Ediza this day, I was having my doubts.  My alternatives were to hiking back to Rosalie, heading up the switchbacks  this time, or to call my trip over a day early and hike (generally) down out to my planned exit at Agnew Meadows.  I decided to turn toward Ediza Lake, and the trail began to climb a bit along the gorgeous cascading creek.  I stopped to rest among the music of the water, before moving further along the trail.  Eventually, and regretfully, I called it a hike, and decided that I better just get to town and hope to get my appetite back.

I was running a tad low on water at this point, and it would  have  been easy to fill up from the cascading creek, but as the trail map showed the trail out hugging the creek much of the way, I figured i could stop and get some later.  This is where my still developing skills at reading topographic maps showed the need for further practice, as in reality the creek dropped dramatically while the trail meandered down.  There would be no more water until I reached the bottom, several miles and another 600′ of elevation net loss. 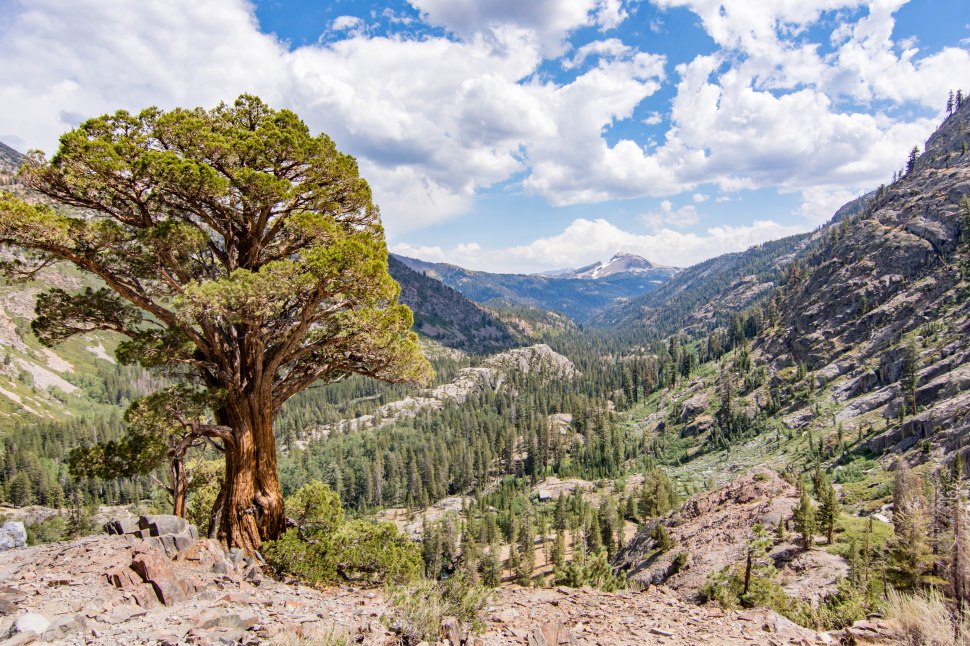 It was hot, sunny an dry, and I was oh so thankful to reach the river at the end of the descent.  This made me even more  thankful to live in the great state of Michigan, where you can hardly turn around without seeing water.  What was left now was a gentle woodland hike, followed by a bit more of exposed trail with a bit of elevation gain, before finally arriving at Agnew Meadows (and then having to hike further uphill to the bus stop).

I was certainly disappointed that I did not stick to my plan of having a nice short first day. That, more than anything, led to my trip becoming more of an educational experience rather than a glorious hike in the mountains and a memory card full of fantastic photos.  It was sad to realize that instead of sleeping under the stars, I would be instead lying in the comfort of a hotel room, enjoying a soft bed and wifi.  I could have used one more disconnected day.  And yet, I was also happy to know I could just pass out in comfort, which I did after forcing myself to down a bit of Subway.

My appetite did not really come back for another day or so, but it is easier to force yourself to eat predictable foods you know you like, than it is to take your cooking gear out of your pack, filter, and rehydrate a meal.  While on the trail, that took more energy than I had to give, even though that act would have kept me on the trail.

While I would not describe this hike as a resounding success, there is no erasing the fact that I got to spend two days in the wilderness.  That is incredible all on its own, and the lessons I learned will make the next trip that much better.  Those lessons, or at least some of them:

These are of course things I already knew from all those books and journals, but sometimes you just have to learn things the hard way.  I am thankful I had the opportunity to finally use my gear, and to experience such amazing scenery.  And I am anxious to hit the trail again!